I thought I wanted a Harley. But two things happened. 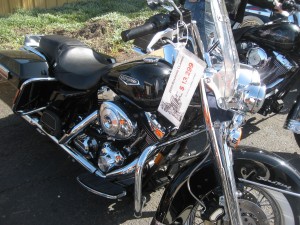 It’s a hard reality borne out on in weeks of Craigslist research. There are a few “bargain” Road Kings to be had for as low as $7,500 but you get the impression they’re tired machines that have hauled one too many fat men on one too many poker runs.

It gave me pause, especially considering the relatively short lifespan of a Harley.

Still, I was not deterred in my pursuit of the mighty Hog until one other thing happened.

I rode one. Or three, actually.

My impressions were not good. Coming off a BMW, it was immediately apparent that these bikes are not built well. It seems Harley uses cheap materials and things don’t fit right. Cables aren’t routed well and sheet metal seems tinny. Function is an afterthought.

Certain American cars of the 1980s come to mind.

Riding a Road King is no less a disappointment.

The 2002 rattled and coughed as I wrung it out on a country road. I instantly ran up against bike’s rev limiter. And I wasn’t going much over 60. The newer bikes were slightly better but they too seemed clunky and slow. The one with the lowering kit scraped its running boards in the parking lot.

I voiced my concerns to the affable salesman, who nodded as if he’d heard it before.

“True, true,” he said. “But you gotta remember, you’re not just buying a bike here. You’re buying a lifestyle.”

As he spoke, an elderly couple in leather chaps and vests strolled by. They started talking to another guy wearing a black Harley T-shirt.

I’m not looking for a new lifestyle, I thought. I’m looking to ride. And you know what? A Harley just won’t do.