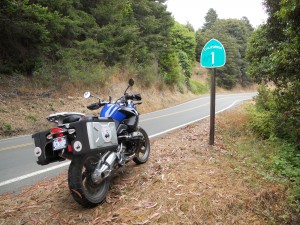 When I ride alone, I prefer to be by myself.
Or something like that.
I start tweaking song lyrics when I’m blasting down the highway on yet another solo run.
I’m finding myself doing more one-man rides as the season kicks into high gear. For some reason, my usual cast of riding buddies are bowing out. And friends I’ve been pestering to buy bikes seem to be putting off for another year the start of their real lives.
No matter. I go it alone. Unlike George Thorogood, I don’t call on Jack Daniels or Jimmy Beam to accompany me. Although I might turn to one of buddy Weiser’s tastier relatives at some point.
Nothing like a cold beer.
It was the case last week when I set out on two, 350-mile rides in Northern California.
The first was a heat avoidance mission that took me up the bracing North Coast of California through Sonoma and Mendocino counties.
And you know what? It wasn’t that bracing. Temperatures topped 85 degrees, defying Mark Twain’s assertion about cold San Francisco summers.
It’s a solid ride, but one I’ve done a dozen times before. Your mind drifts as you cover the all-too-familiar ground. Did I close the garage door? Is my wife mad at me for being gone so long? Is the dog depressed?
Then comes the singing. My voice sounds pretty good when it’s bouncing off the inside of my helmet.
Deep in musical thought, I round a corner at 80 and find a slow-moving motor home in my path.
That’s usually when I take a rest stop. On this ride, I pulled over in the tiny town of Leggett, where hippies and lumberjacks coexist amid the odors of ripening weed.
The Peg House touts one of the best bacon cheeseburgers in the west, so I ordered one, along with a beer.
I consider myself a people person but my words to the cashier were the only sounds I would make.
As the meat cooked, I listened to other customers talk. A guy in tie-die prepared an outdoor stage, occasionally mumbling to himself.
The burger arrived. It was good but not great. I ate it in silence and was off.
I picked up Highway 1 and rode west, donning extra layers before emerging on the shimmering coast and heading down to Fort Bragg.
Fort Bragg, the former mill town, was awash in tourists soaking up its Victorian charm. I seized the chance to soak up a beer at the North Coast Brewing Co. and continued south, hitting Mendocino and then hanging a big left turn at Highway 128.
As I’ve mentioned before on this blog, Highway 128 is not to be missed. Its cambered turns, open straights and smooth asphalt make you feel like you’re on a track. But take care. You’re not. Plenty of slow traffic and California Highway Patrol officers, too.
I was face-to-face with a Chippy who did a u-turn in the middle of the highway to go after a speeder. He looked angry as I slowed and waited for him to complete a three- or maybe four-point turn.
He sped off, chirping his tires. I high-tailed it, too, jumping quickly into triple-digits with the knowledge the only cop for 50 miles was moving fast in the opposite direction.
Before I knew it, I was home.
I spent a day out of the saddle before embarking on ride No. 2 from Santa Rosa to the foothills town of Murphys – and back.
But there was a twist. I was meeting an old friend from Stockton who owned a motorcycle. I was excited at the prospect of riding with others.
I raced across the San Joaquin Delta in an early morning fog, anticipating an adventure.
I wasn’t disappointed, but my friend clearly lacked my enthusiasm. Turns out he hadn’t taken his bike from the garage in a few years.
We rode at a slower pace the 70 miles or so into the foothills, stopped for lunch and then he announced he had to go back.
It was still mid-day – well before quitting time for me. I pulled out a map and plotted a meandering route home.
Alone on historic Highway 49 I considered the fact that motorcycling is a solitary endeavor. You can ride with groups or install walkie-talkies in your helmet, but there’s no escaping the reality that you are alone.
And maybe that’s just as well. More beer and high speed for me.