I’m an addict. I admit it. There’s nothing I can do.

I’m hooked on lane splitting, the grin-inducing and perfectly legal maneuver that allows me to escape my otherwise grid-locked existence. 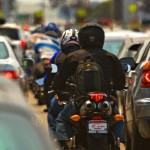 The fun is two-fold. First, I can avoid traffic jams and the misery that comes with breathing car exhaust and melted plastic fairings.

More importantly, I get to whiz by everyone else in a high-speed slalom that is part down-hill skiing, part Indy 500.

It’s always just a bit scary when you’re sneaking up behind a car, poised to shoot the gap. There’s the possibility that a driver might change lanes suddenly or slam on the brakes.

And some cars are harder than others to get around. The Ford F-250 pickup with its hyper-extended mirrors is my least favorite vehicle to come across. And for some reason, hybrid drivers appear to be somewhat unpredictable.

But I’ve had no incidents so far, knock on wood, except, of course, for a ticket for going too fast between cars. The CHP officer who wrote me up said a bike is not permitted to go 10 mph faster than traffic when lane splitting.

I guess I’m just fortunate that it is allowed at all. California is one of the few states to permit it.

Anyway, here are a few tips and observations for successful lane splitting:
1. The ideal time to do it is when two cars are side-by-side. That way they can’t change lanes.
2. Be smooth. Don’t swing out wide before and after passing cars.
3. Pass cars quickly and before they notice you, if possible. It leaves less time for nervous drivers to hit the brakes or swerve.
4. Watch for sudden lane-changers in bumper-to-bumper traffic.
5. Be nice. Don’t act like you’re entitled. Drivers are watching you and they’re bigger than you.