Here’s a bold admission: I love to ride motorcycles but you’d never catch me on the back of one.
People who do that are crazy.
I don’t mind if someone rides behind me on my bike. I love taking my young daughter on jaunts around the neighborhood and I’m constantly pressuring my wife to go on rides.
But trust some fool with my life? Hell no. I refuse to go there. 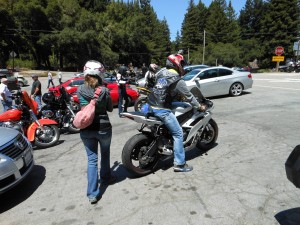 Gee honey, is it supposed to be that small?

So it goes without saying that I’m confused and even a bit horrified about a practice I see among crotch-rocket riders and the typically fine young things who cling to them.
Perched on seats no bigger than a lipstick purse, these brave women throw caution and dignity to the wind for the chance to sit behind their men.
Two thoughts immediately come to mind.
1. It can’t be safe.
2. It can’t be comfortable.
Hoping to discover the truth about why someone would willingly ride on back of a Ninja-type machine – but not wanting to get too deep into psycho-sexual disorders – I talked to women at a local bike shop about the topic.
They offered a range of responses from the insightful, “It’s fun,” to vaguely sexual claims about feeling closer to their men.
“Outside of the bedroom there’s no bigger thrill,” said a woman straddling a brand-new liter bike on a showroom floor.
But not all of the five women I talked to were so enamored of riding pillion.
Two admitted they disliked it intensely. One said it was the reason for a recent break-up.
“He insisted on it,” she said. “I have my own bike now.”
I found myself in complete agreement with this thought.
Why in the world would you climb on one of those tiny back seats, put your feet on those high foot pegs and ride down the road with your ass in the air?
I can understand why someone might co-pilot a big ole hog, Goldwing or other rolling Lazy Boy, but not a 150-horsepower sport bike with a two-by-four for a seat.
It’s just frigging stupid.
But alas, I must be missing something because people keep doing it. Maybe I’m just jealous.