I was walking down the street, talking baseball and spring training with a friend, when a guy on a Harley roared by.

The conversation stopped until we could hear our voices once again.

“Talk about your Boys of Summer,” my friend said. “That’s what I call the Noise of Summer. And it’s coming early this year.”

He was right. With the mild weather, bikers were getting a head start on the riding season. Not only could you see it but you could hear it. 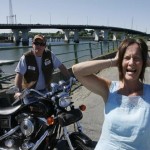 The long-standing debate over loud pipes came to mind.

Some insist they save lives because people in cars hear you coming. It’s a hard point to argue if you’ve ever had a driver change lanes on you as you’re doing 80 on the freeway or had a car pull out in front of you in an intersection.

The flip side is the noise is annoying. Sure, it commands attention but it disrupts everything around it. Thoughts are forever lost. Nerves are frayed. And people cop an attitude about motorcycles.

As my friend points out, the safety argument falls flat when you consider that many Harley riders — no doubt the biggest offenders — place little importance on safety equipment. Half-dome helmets and sleeveless vests won’t do much to protect you when you’re sliding across the pavement.

Former Gov. Arnold Schwarzenegger, himself an avid motorcyclist, took a stab at solving the problem before leaving office. He passed into law an anti-tampering bill that sets fines starting at $50 for anyone riding a bike with a loud, modified exhaust. Police can’t pull people over for noise, but if they stop you for another violation and your exhaust system doesn’t have a federal emissions stamp on it you will get a fix-it ticket.

However, the law only applies to bikes built in 2013 or later, so expect at least one more noisy summer before anything changes.

3 thoughts on “Loud pipes: Saving lives, one pissed-off neighbor at a time”