Ok. We’re not exactly breaking out the barbecue here on the North Coast of California.
Because it’s February. On the North Coast.
But it is warm, with temperatures flirting near the upper 60s. So warm that I fired up the bike this weekend and made a savage run to the beach, heating up the tires and getting a few grins while avoiding Sunday drivers and the fine gentlemen parked behind billboards. 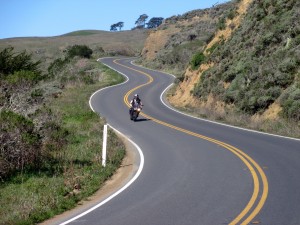 Winter on the coast -- Highway 1 near Tomales Bay

Overall, it was a hell of a good day! My helmet is off to Punxatawney Phil. It was positively springlike.
Other riders took advantage, as well.
In my blast to Pt. Reyes Station via Highway 1, I saw sport bikes, dual sports and choppers, all basking in their own moto moments. I 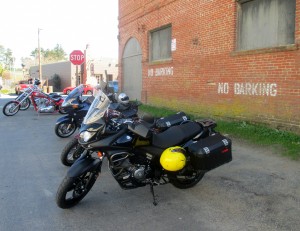 No dog days of winter here

met a guy on a ’38 BMW R-61 who rode to Marin County from San Francisco wearing what looked like a trench coat.
He seemed surprised when I asked if he rode “that” over the Golden Gate Bridge.
“Of course I did,” he said, pointing out that the bike survived World War II and was rescued from a Polish barn. “Why wouldn’t I?”
He rolled away in a whir of sewing machine noise.
I took it as my cue and got my modern-day bike up to warp speed, flying north up the asphalt ribbon that envelopes Tomales Bay.
I scraped a foot peg or two, paused for pics and headed back to may own barn.
I stopped short of reconnecting the trickle charger. I have a feeling I won’t be needing it.