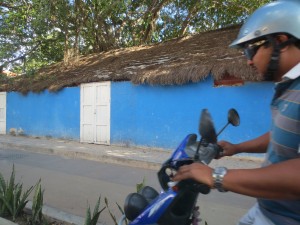 Some dude riding at the playa

I had bikes on my mind when planning a family vacation to the Cancun area in December. I figured I’d rent a dual-sport or even a Harley at one of those over-priced tourist joints. While my wife and daughter lay on the beach at a sunny resort, I’d be off riding in a foreign land, looking for adventure and inexpensive tequila.
I figured wrong.
You see, the part of Mexico bordering the Caribbean Sea is great for relaxing, exploring ruins and watersports. But it’s not the best place to ride, in part because it is so flat. Roads go east and west, north and south, with few curves or hills in between. Endless jungle is all you see. Can you say boring?
Also, like Baja, the roads themselves aren’t all that good. Many are cobbled with, well, cobblestones. And Mexicans seem to have an obsession with speed bumps, which they call “topes.” They appear to crop up on any straight long enough to shift into second gear. I know of at least one economy sized rental car in serious need of an alignment!
I was cured of any Wild Hog aspirations after a quick trip to town in said rental car. Traffic was more dicey than a Los Angeles freeway at rush hour. Overladen trucks and dilapidated taxis careened by. Uniformed men carrying submachine guns glared from checkpoints.
Amid the chaos only locals were brave enough to ride motorcycles. They must be really good, I thought. They buzzed around me with great daring, seemingly risking life and limb to get from A to B.
I soon realized they were riding not because it was fun but because it’s a cheap form of transportation.
Maybe that’s the best that can be said of motorcycles anywhere.
Or not.
Nevertheless, I gave up my dream to ride the Mayan Riviera and focused instead on the mango daiquiries.