I mostly adhere to the motorcycling principal of ATGATT, which means All The Gear All The Time. Truth be told, I don’t always wear every stitch of protective clothing. I’ve ridden many a mile in Levis. 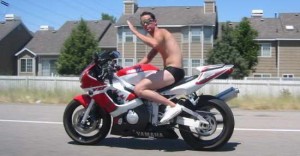 But I almost always wear a padded riding jacket, calf-length boots and, of course, a full coverage helmet and gloves. For some, ATGATT is like a religion that promises to save your skin, if not your soul. I believe in it but I don’t necessarily go to church on Sundays.
As the motorcycling season gets into full swing, it’s easy to spot the straight-up heathens. They’re sporting half-helmets, sleeveless T-shirts and tennis shoes. Or worse – shorts. I wonder if they are receiving the motorcycle accessory catalogs I’m getting in the mail.
According to publishers of the latest rag, motorcycle riders fall into two categories, based on gear. The first is clean-cut, vaguely effeminate and prefers exotic sports bikes. The second is a scowling bald man with goatee, leather chaps and a cruiser.
I pondered the neatly simplistic division as I thumbed through the June edition of the aforementioned junk mail. Sport riders are happy people, I thought. Bikers are a pissed off lot. Sport riders have perfectly gelled hair. Bikers wear pirate earrings.
Where would I fit in?
My mind wandered. Are these guys real riders or just models? How many have ever thrown a leg over a bike? Is that an Aprilia in the background?
I pored over each picture looking for clues. As I did, I found myself drawn in by the marketing genius of it all. That waterproof adventure gear actually looks pretty good, I thought. Cheap, too. Maybe I should buy a jacket. And how about those gloves? Decent price. Maybe I should get a second helmet.
I reached for the order form.
I was an easy sell, in part because in addition to being a junk mail critic, I covet gear. Textile suits and Italian leather jackets are just a start. I get excited about the latest travel bags, tank-mounted video cameras and all manner of roadside emergency equipment. When it comes to riding I live the Boy Scout motto: be prepared. A less flattering label is Gear Whore.
It’s not a good image. But it’s a lot better than the sight of a road-rashed limb from someone who crashed wearing cargo shorts.

Each year, I talk about going on The Big Ride, a multi-state adventure that satisfies my wanderlust while transforming me into a better human being.
And so far, it hasn’t happened. I’ve been on a few overnight rides that could be seen as warm-ups for a long journey but the 2,000-mile odyssey across time zones has eluded me. 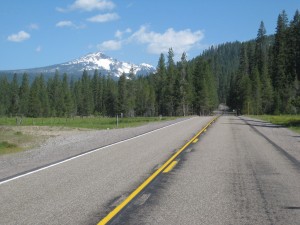 For whatever reason, I’m no Captain America. Not even a wild hog.
So it’s a good thing I live where I do on the north coast of California. It’s hard to beat as a jumping off point for mini-adventures. A weekend pass from work and family obligations is ideal but you can have fun with even less time.
Here are three short trips I highly recommend. They all begin and end at the Golden Gate Bridge. If you live outside Northern California, you are just a plane flight and motorcycle rental away from the action.
1. Highway 1/Mendocino loop: This three-county ride takes you to where the Pacific Coast Highway meets the redwoods. From the bridge, go north on Highway 101 to Mill Valley and exit at Hwy 1/Tamalpais Valley Road. It will take you west a bit to Muir Beach before it turns due north through Marin and Sonoma counties.

Good places to stop include Pt. Reyes Station or oyster restaurants on Tomales Bay like Nick’s Cove. A good gas stop about 80 miles north of Pt. Reyes is Gualala. From there, you get into desolate coastal landscape reminiscent of Scottish highlands. Cool towns include Elk and Mendocino. random

Fort Bragg is about 60 miles north of Gualala. It’s a typical beach town with tons of clean, cheap hotels and a decent downtown. The brewpub is not to be missed. The return trip is faster. Head east on Highway 20 to Willits or shoot down Hwy. 1 to Highway 128, and go east through the scenic Anderson Valley. Hwy. 128 is preferred. Plenty of slow, sweeping turns with good asphalt underneath. All roads lead to Highway 101 at Cloverdale. You’ll be slabbing it on the freeway for about 75 miles to get back to Sausalito.
2. Trinity Wilderness (two nights): First day is about 225 miles. Head north from the bridge on Hwy 101 to Hwy 37 and go to Napa. Continue north on Hwy 29 through the famous Napa Valley, past Clearlake and onto Hwy 20. That takes you to Williams on Interstate 5, where you’ll slab it for about 100 miles to Redding. The real fun starts just west of Redding when you get on Highway 299. First, you’ll want to find lodging in Whiskeytown or French Camp. Rest up on this first overnight stop because in the morning you’ll be departing for major adventure on Highway 299. It twists and turns along the Eel River in some of the most spectacular scenery around. Go all the way to Eureka or detour on Hwy 3 to Hayfork. 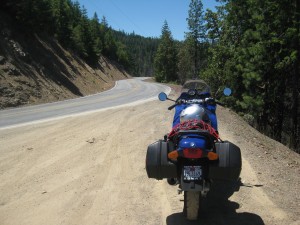 Highway 36 near the Mad River

Then find Hwy 36 and go west. Come down Highway 1/101 through the Avenue of the Giants. You can camp or find a hotel. The Benbow Inn is nice. In the morning ride 200 miles south to san Francisco on Highway 101.
3. Sierra loop (one night): Same as ride No. 2 but when you get to Williams head east through Colusa and Yuba City until to Highway 70. From there, ride northeast as the road ascends along the Feather River.

Spend the night in Quincy, an old logging town on the back side of the Sierra at about 4,000 feet. Next day, ride south to Calpine and get on historic Highway 49 to Grass Valley. Go further south to Auburn and super-slab it 125 miles on Interstate 80 back to San Francisco.

There was a time before recycling went mainstream when people would dig a hole in their backyards and throw just about anything in it.

Got some old insulation you can’t use? Bury it. Old lead-based paint? Bury that, too. Used motor oil? Dump it on the ground.
A back yard wasn’t particularly necessary. I can remember the scene outside the local auto parts store when I was a kid. Grown men drained motor oil in landscaping planters. Used filters were strewn about the parking lot.
Flash-forward a few decades and such behavior is almost unheard of. It’s getting better because of widespread awareness that dumping – whether it’s an old couch or used car batteries – is bad for the earth.
Nowadays, places like auto parts stores and quick-oil-change businesses are helping out by collecting used motor oil at no charge.
At least that’s what I was told by the folks at Ridersrecycle.com. They are all about educating motorcycle riders about correct ways to dispose of oil and filters. Since many of us do our own mechanical work, they want us to known our options.
I decided to test the system. I took a gallon jug of used oil and an old filter down to my local Pennzoil quick lube place to see if they’d take it. Guess what? They did. First, they told me to drive around the side of building. Then an employee came out and asked for my zip code. I gave it to him and he grabbed the jug. He was just about to walk off when I reminded him about my filter. He took that, too. No problemo.
Overall, it was a hassle-free experience. I’d recommend it to anyone. For more information about oil recycling, check out the links at Ridersrecycle.com

Can’t say I’ve ever experienced a two-year erection from any of the three BMWs I’ve owned.
For me, riding such sensible German machines has always had about the same loin-stirring effect as a kiss from my grandmother. And she’s been dead for 15 years.

But the unflagging condition is exactly the claim by a California man who is suing BMW of USA and aftermarket seat makers, Corbin-Pacific, in San Francisco Superior Court.
The plaintiff maintains he’s suffered a constant erection since a 2010 road trip on a bike equipped with the special seat. Ridges designed for comfort instead led to the hardship that has made getting dressed and going to the bathroom a problem, his lawyer said in published reports.
The science behind what’s termed by doctors as a “severe priapism” is clear – blood gets trapped in the penis from prolonged contact with the seat, rendering it unable to return to its flaccid state.
But metaphorically speaking, it seems odd that it would happen on a BMW. BMW riders are more likely to fall asleep or die of old age than spring into a posture of masculine readiness.
When I think of bikes with strong arousal factor, my thoughts usually turn to more manly mounts. Maybe a Harley or a stripped-down racing machine. Ducati, for example, sells a bike called a “testaretta,” which, if I’m not mistaken, refers to some anatomical part that is red.

My own experience with groin-stiffening machines is limited but distinct. I’ve ridden Harleys and Ducatis and owned so-called “hooligan” bikes – Triumph’s Speed Triple and Kawasaki’s ZRX1200r.
Looking back, I’d have to say my “chubbiest” moments came on the Triumph. I stared at the sleek, black, bug-eyed machine for hours the day it arrived from the shippers. Its three-cylinder engine had an unmistakable growl that made my heart race.
But love is fleeting. One morning during a triple-digit run down the freeway, the Trumpet choked on the tip of spark plug and came to a grinding halt. It survived major surgery but the majority of my bank account didn’t.
My feelings waned after that. A guy from Sacramento offered a trade for his cobalt-blue BMW and I took it. I remember the look in his eye when he fired it up and drove off. Major wood.
I was happy with the deal, too. As I rode home on my well-engineered, if not boring, BMW, I took comfort in knowing this bike would never leave me stranded. I could take it cross-country tomorrow. It had smart features like locking bags and a saddle that didn’t make your butt numb after 50 miles.
And suddenly, I felt a tensing down below.