My new-to-me motorcycle is a real departure from the sport bikes and hooligan machines that usually catch my eye. It has a big fairing, built-in stereo, three bags and an electric windshield you can raise or lower as you ride down the road.

My ’02 BMW R1150RT is nothing if not gentlemanly. It drew light ribbing from my non-riding wife when I pulled it into the garage. 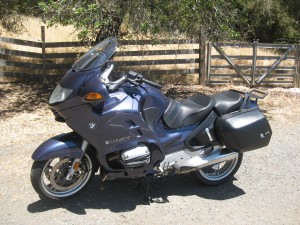 “God, is that like a Gold Wing or something?” she asked, poking at the antenna next to the windshield. “You might want to join the Shriners now.”

I very quickly reminded her that this is the official bike of the California Highway Patrol. They use it to catch bad guys, see. It and its predecessor, the R1100RT, have been written up in every single motorcycle magazine as sport-touring benchmarks. It’s the bike all others try to match.

But the damage was done. She planted a seed. That night I began to wonder if I made the right choice. I had been thinking about BMW’s sportier R1100s and even had a line on a Ducati ST3. However, neither bike was as confidence-inspiring as the bigger Beemer. Neither had the comfort. I thought about the last painful time I went touring on a sport bike. I cast my lot with the RT.

I could live with the pedestrian image. But a slow, ill-handling beast was something I could not tolerate. So the next weekend, I put the bike through its paces at the best place around for such a mission — Skaggs Springs=Stewart’s Point Road outside Healdsburg.

Getting there from Santa Rosa on Highway 101 was a breeze. The bike eats up slab without a hiccup. It sits high, affording great visibility, and splits lanes well. You get a lot of double-takes from people noticing the familiar CHP profile. Those who don’t pay attention and drift in your lane get to hear one of the loudest air horns ever on a motorcycle. 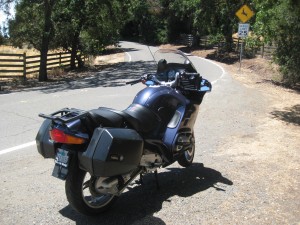 Things didn’t change much on the back roads. The bike is noticeably top heavy but acquits itself well in the twisties. My bike has recently installed Wilbers shocks front and rear so the suspension is tight. The linked ABS brakes take some getting used to. I found the key is to never step on the back brake pedal. It lacks the acceleration of a super bike but it will get into triple digits with minor coaxing.

On the way home I played with all the gadgets again, adjusting the electric windshield, fiddling with the heated grips and playing the radio. It may not be cool, but this Beemer truly is the King of the Road.

I got to know my local car rental agent during my recent quest for a new bike.
Rather than pestering friends or my wife for rides, I rented cars on a one-way basis with plans to drop them off in the seller’s hometown. A drive-and-ride, if you will.
I did it four times, traveling as far away as 150 miles to see bikes I spotted on Northern California Craigslist sites. It was about three times more than I hoped. And guess what? I didn’t buy any of the bikes. In the end, I picked up a nice sport-tourer from a guy living practically around the corner. 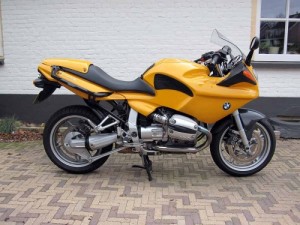 But it was a method with some promise, especially for those who live in sprawling regions. Or for people like me who just want to limit the number of friends and family members who witness our tortured decision making process.
Here’s the way it went for me. I’d spot a bike I liked, call the owner and have a nice long talk. If it sounded good, I’d reveal my plan to rent a car and ask if the seller could provide a short ride if necessary.
I’d pick up the car the next morning and make the drive. The first trip was the longest — nearly three hours one way. It was a gamble — and I threw craps. The bike wasn’t as described. 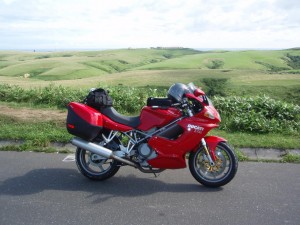 It was too bad because I had just driven across the top of the state and the seller seemed nice. Within minutes of arriving I turned to him and said no thanks.
It had to be done.
Of course, I tried to salvage the day by seeing bikes on the way home but I couldn’t reach anyone. They were all at work. The rental agent was surprised to see me when I pulled onto the lot just before closing. It was a long day.
Less than a week later, I went for it again. This time I was positive it was going to work out. It was a one-owner bike with low miles and slightly underpriced. I’d always dreamed of having one. And it came with tons of extras that I envisioned selling on eBay. 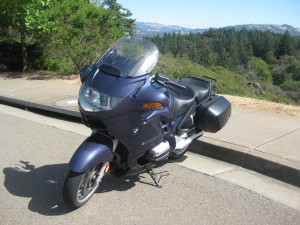 But after making the drive and test-riding the bike, I began to have doubts. The seating position was too hunched over for a touring bike and it had that noisy dry clutch. I knew I was walking away from it when the guy produced maintenance records that showed the every-6K service was more than $1,500.
My mind raced to come up with an excuse for not buying a bike that was actually a pretty nice bike.
“It’s just too fast for me,” I lied. “I’m going to have to think about it over the weekend.”
I marched out to my rental car and drove home.
It was scene that played out two more times, at great expense, before I happened upon the perfect bike, virtually down the street.

It’s early Friday morning and from my desk I can hear the rumble. 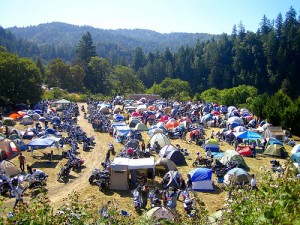 Camping with the bikers

Packs of Harleys are roaring up Highway 101 to the annual Redwood Run near the Mendocino County town of Piercy.
Organizers expect 5,000 people for the weekend event famous for its live music, skinny dipping on the Eel River and debauchery of a kind seen only on Bourbon Street.
My office is 1,000 yards from the freeway’s edge and about 140 miles south of the action. I sip coffee and Google the event on the Internet as a cubicle mate curses the steady noise outside.
First the images – biker women flashing their boobs, tattoos, a man on a Harley doing a wheelie. I go to the event website. The official poster describes it as the “last true run” and an “old school” party.
“Two nights of non-stop, kick-ass music. Scenic camping … motorcycle shows and wet T-shirt contests,” it declares.
What’s not to like?
I begin thinking of ways to convince my wife to go. I pick up the phone and call her at her office. We Google together. “Uh, I don’t think so,” she says, looking over the pics.
“What?” I say.
“You suppose a lot of men will be showing their penises?” she asks. “Not happening.”
We get off the phone and I think maybe I’ll just shoot up there myself on the Beemer.
But that wouldn’t be right. You gotta have a Harley. I pick up the phone again and dial a rental company. The guy on the other end just laughs when I ask if he’s got a bike available.
I guess it takes planning to be a biker. That and a biker wife. As I browse through more pictures of tattooed women in halter tops and sunburned men with bulging guts I think they sure seem to be enjoying it.